It was a closing night for the record books, that’s for sure. The show? Us & Everything We Own, a new play by Sean Minogue that finished its world premiere run last Saturday April 13th, at the PAL Theatre.

At about an one hour before curtain, the house tech and I were starting our pre-show checklists, and the one actor who was back from dinner break had just begun to warm up on stage. There was a sudden “powering down” sort of noise and all the lights went out. After a few seconds of total darkness, the emergency generators kicked in, and some of the work lights over the stage flickered to life. We opened the heavy curtains that line one wall of the theatre and looked out over Coal Harbour. It was still daylight, and we could see people in neighbouring buildings doing the same as us, looking out their windows or coming out onto their balconies to assess the extent of the outage.

A call to BC Hydro confirmed what we already suspected: the power was out, not only at PAL and surrounding buildings, but across a significant swath of downtown. Estimated restoration time: 9 pm.

END_OF_DOCUMENT_TOKEN_TO_BE_REPLACED

GREASE IS THE WORD FOR FOOTLIGHT THEATRE’S 46th SEASON

Forty years ago, Grease opened on Broadway and was a runaway hit! Just six years later, the film version starring John Travolta and Olivia Newton John smashed box office records to become the highest-grossing movie musical of all time. For many, Grease is STILL the word, and brings back memories of rockin’ music, fantastic dancing and, of course, tight black pants! So dig out that poodle skirt or biker jacket and brush up on your hand jive skills; this November, Footlight Theatre is taking audiences back to 1959 with an exciting new production of the ultimate high school musical.

Plot synopsis? No need. The classic, hilariously corny storyline – first love, teenaged cliques, fast friends and faster cars – will be familiar to many… and so will the 50s-style pop/rock soundtrack, jam-packed with beloved hits. From “Summer Nights” and “Greased Lightnin'” to “Born to Hand Jive”, “We Go Together” and so many more, you won’t be able to keep from singing along!

Footlight’s large and talented cast includes Jennie Neumann (Rizzo), well known to local audiences thanks to her acclaimed portrayals of Tracy Turnblad in Hairspray and Natalie in Next to Normal (both at the Arts Club Theatre). Jennie will be joined by Lucas Blaney (Blood Brothers at the Arts Club) as Danny Zuko, Alex Gullason (Titanic at Theatre Under the Stars) as Sandy, and Craig DeCarlo (Roger in FCP’s Rent) as Kenickie. Footlight’s production is directed and choreographed by Lalainia Lindbjerg Strelau, with musical direction by Tom Arntzen and Monique Creber, set design by John Bessette, lighting design by Phil Guhl, costumes by Christina Sinosich and production stage management by Melanie Thompson. Tickets start at $19.59 (yes, the year the show is set) and are on sale now at http://www.ticketstonight.ca. Don’t miss out!

FOOTLIGHT THEATRE COMPANY has been producing quality community theatre in Burnaby, BC since 1965. Recently the company followed smash hit productions of Joseph and the Amazing Technicolor Dreamcoat (2009) and The Sound of Music (2010) with another family classic: The Wizard of Oz (2011). High production values, big talent both professional and amateur, and tons of heart: these are the hallmarks of a Footlight show. Visit www.footlight.ca for more information.

The Wizard of Oz (Footlight Theatre)

FOOTLIGHT THEATRE IS OFF TO SEE THE WIZARD!

**A slight variation on this text was also published as the cover article in the October 2011 edition of Playboard Magazine.

This November, the team that brought you last year’s smash hit The Sound of Music takes on another family classic. Footlight Theatre Company is proud to present The Wizard of Oz, a musical adaptation of the beloved 1939 film starring Judy Garland. Footlight’s production features a large and talented cast of 70+ adults, teens and kids, including professional and amateur performers from Vancouver, North and West Vancouver, Burnaby, Richmond, Coquitlam, New Westminster, Port Coquitlam, Port Moody, Delta, Langley, Surrey and White Rock.

The pivotal role of Dorothy Gale is traditionally played by a young adult, but 12-year-old Michelle Creber is more than up to the challenge. She’s a triple threat with some hefty stage, film and TV credits already under her belt, including rave reviews for her performance as Annie at both Theatre Under the Stars (2009) and Gateway Theatre (2010). Kimberley Page, a veteran of starring roles at TUTS, Gateway and RCMT, brings to life Dorothy’s nemesis, the nasty Miss Gulch/Wicked Witch of the West.  Footlight welcomes back Bree Greig (Maria in The Sound of Music and the Narrator in Joseph and the Amazing Technicolor Dreamcoat) as Glinda the Good Witch. Dorothy’s quirky sidekicks will be played by Benjamin Wardle (Scarecrow), Theo Marx (Tinman) and Chris Adams (Cowardly Lion).  These talented performers share the stage with a colourful chorus of Munchkins, Ozians and exotic Flying Monkeys (yes, they really will fly!).

Director/choreographer Lalainia Lindbjerg Strelau, musical director Michael Creber, and a team of award-winning designers (sets by Marshall McMahen, costumes by Christina Sinosich and lighting by Michael Schaldemose) are guaranteed to put a fresh and exciting spin on the familiar story. Footlight’s production of The Wizard of Oz promises to be its biggest yet, and a fitting celebration of the company’s 45th season. www.footlight.ca

This official blurb doesn’t really come close to describing the intense hard work and sheer fun of putting on a full-length musical in two weeks. We were thrilled with how the show turned out, though, and very proud of all the kids who threw themselves into the project with gusto, and grew by leaps and bounds in such a short time.

This week, Mulgrave School is putting on a show like you’ve never seen before…literally.  A cast and crew of more than 60 students are presenting the world premiere of a brand new original musical. With a colourful cast of characters and a dynamic pop/rock soundtrack, Cyberlife: The Musical puts a 21st century spin on a classic teen movie premise: high school life is ruled by cliques, with the cool kids and jocks lording it over the geeks and loners, but behind the stereotypes, everyone just wants to have friends and fit in. Enter Cyberlife: an online role-playing game, in which anyone can create an avatar and become whoever they want. A nerdy music geek remakes himself as a singer-songwriter with a crowd of adoring fans; a popular girl, secretly confused and insecure, transforms into a smart, fast-talking 1920s bombshell à la Marlene Dietrich; and a lonely rich kid becomes a heavy metal rock star. In the anonymous world of Cyberlife, it’s okay for such a motley crew to become friends…but then a trouble-making hacker arrives on the scene. Suddenly their fantasy world is no longer the secret, safe place they thought it was, and things start to get complicated in real life. As the story unfolds, the characters discover the trials and tribulations of cliques, online communities and true friends.

Tickets for the performances (this Wednesday April 6 through Saturday April 9) are available for purchase during regular school hours, Monday to Friday 8:00am to 4:00pm. Contact Jessica May at 604-913-6050 or in person at the front office for sales. Tickets will also be sold at the door before each performance.

The Story Behind the Show:

Cyberlife is an original commission with a twist: many of the students who are participating as cast and crew have been involved from the very beginning of the creation process. This past fall, before a single note or line of dialogue had been written, the creative team – composed of Danny Balkwill, Dean Balkwill and Craig Salkeld (professional performers, writers and musicians whose credits include Mirvish Theatres’ The Lion King and We Will Rock You, national tours of Tommy and Mamma Mia, and the Broadway production of Rent) – ran a workshop at the school, during which musical theatre students bounced ideas around, discussing themes and characters and possible storylines. The writers took those ideas away and turned them into Cyberlife, a musical uniquely tailored to the interests and talents of the students who will perform it. Visit www.mulgrave.com for more background, photos and video clips from rehearsals.

Christmas on the Air 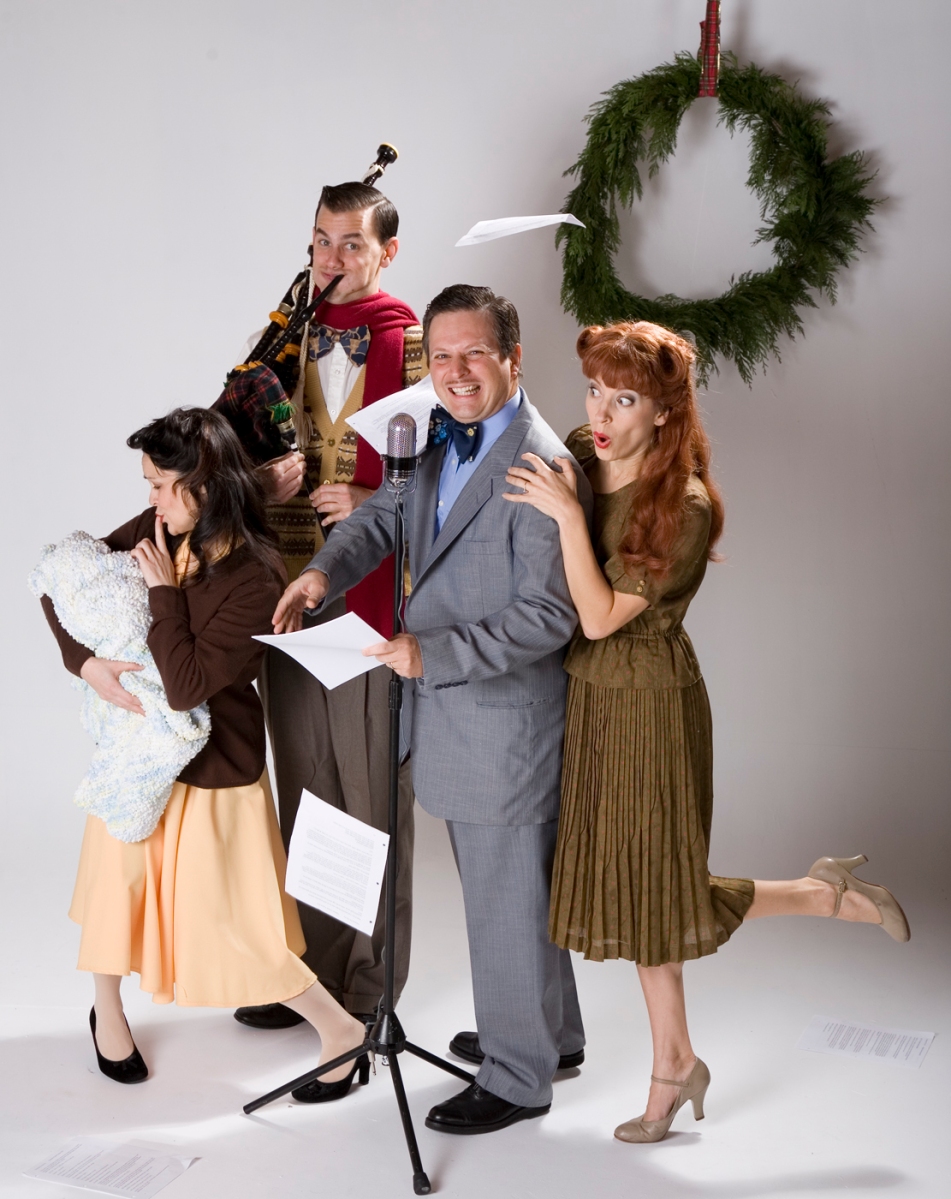 Journey back to the days when radio was king, as Yolanda and Percival B. Frank present their annual Christmas radio broadcast before a live studio audience. I am having so much fun stage managing this show, which is directed by Shel Piercy, and features Damon Calderwood, Lalainia Lindbjerg Strelau, Ben Elliott, Seana-Lee Wood and Diana Kaarina. The premise is that the five cast members are doing a live radio broadcast from a church basement on Christmas Eve in 1949. It’s set in Vancouver, so there are tons of fun local historical references. It’s Christmas-y without being too sickly sweet…there are stories (with old fashioned sound effects created by the actors on stage) and lots of lovely Christmas music…and, of course, plenty of behind-the-scenes shenanigans. Rumour has it that the stage manager even has a few lines… (eep!).

150 costumes (not including kids)…

Joseph and the Amazing Technicolor Dreamcoat

“Go big or go home!” That’s Footlight Theatre’s motto for 2009. After many shows in a smaller venue at the Shadbolt Centre for the Arts, the community theatre company will be moving into the 600-seat, state-of-the-art Michael J. Fox Theatre for its annual fall production.  What better vehicle for this exciting step than Joseph and the Amazing Technicolor Dreamcoat – a hit musical about following your dreams, no matter where they take you.  With lyrics by Tim Rice and music by Andrew Lloyd Webber, Joseph is a family classic, a rags-to-riches story that is guaranteed to have audiences of all ages singing along and dancing in their seats.

Director/choreographer Lalainia Lindbjerg Strelau and musical director Monique Creber have assembled a large cast of 34 talented triple threat performers, led by Danny Balkwill in the title role. Danny recently returned to Vancouver after a two-year engagement with Mirvish Productions’ We Will Rock You in Toronto; his credits also include the Canadian touring company of Mamma Mia. He and the rest of the adult cast will be supported by a children’s chorus of 60 kids from all over the Lower Mainland, led by Michelle Creber (last seen in the title role of Annie at Theatre Under the Stars) and Emily Matchette (Young Cosette in the Arts Club’s production of Les Misérables). The whole group will be backed by a live band that includes Michael Creber (piano), Buff Allen (drums), Dave Ivaz (guitar) and Rene Worst (bass). These Juno Award-winning, Grammy-nominated musicians have played with such A-list entertainers as David Bowie, k.d. lang, Diana Krall, Aerosmith and Ray Charles; their theatrical credits include Broadway touring productions of Rent, Miss Saigon, Chicago, Showboat, The Wiz and Annie.

With a dynamic cast that’s almost a hundred strong, a world-class band, amazing Technicolor costumes by Christina Sinosich, sets by Ian Schimpf and lighting by Des Renard, this Joseph will be the biggest show in Footlight’s history – an adventure not to be missed.