The Wizard of Oz (Footlight Theatre)

FOOTLIGHT THEATRE IS OFF TO SEE THE WIZARD!

**A slight variation on this text was also published as the cover article in the October 2011 edition of Playboard Magazine. 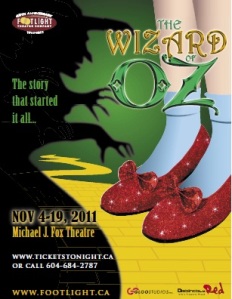 This November, the team that brought you last year’s smash hit The Sound of Music takes on another family classic. Footlight Theatre Company is proud to present The Wizard of Oz, a musical adaptation of the beloved 1939 film starring Judy Garland. Footlight’s production features a large and talented cast of 70+ adults, teens and kids, including professional and amateur performers from Vancouver, North and West Vancouver, Burnaby, Richmond, Coquitlam, New Westminster, Port Coquitlam, Port Moody, Delta, Langley, Surrey and White Rock.

The pivotal role of Dorothy Gale is traditionally played by a young adult, but 12-year-old Michelle Creber is more than up to the challenge. She’s a triple threat with some hefty stage, film and TV credits already under her belt, including rave reviews for her performance as Annie at both Theatre Under the Stars (2009) and Gateway Theatre (2010). Kimberley Page, a veteran of starring roles at TUTS, Gateway and RCMT, brings to life Dorothy’s nemesis, the nasty Miss Gulch/Wicked Witch of the West.  Footlight welcomes back Bree Greig (Maria in The Sound of Music and the Narrator in Joseph and the Amazing Technicolor Dreamcoat) as Glinda the Good Witch. Dorothy’s quirky sidekicks will be played by Benjamin Wardle (Scarecrow), Theo Marx (Tinman) and Chris Adams (Cowardly Lion).  These talented performers share the stage with a colourful chorus of Munchkins, Ozians and exotic Flying Monkeys (yes, they really will fly!).

Director/choreographer Lalainia Lindbjerg Strelau, musical director Michael Creber, and a team of award-winning designers (sets by Marshall McMahen, costumes by Christina Sinosich and lighting by Michael Schaldemose) are guaranteed to put a fresh and exciting spin on the familiar story. Footlight’s production of The Wizard of Oz promises to be its biggest yet, and a fitting celebration of the company’s 45th season. www.footlight.ca