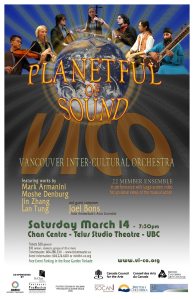 The Vancouver Inter-Cultural Orchestra presents sounds of China, the Middle East, India and the West, in works by Vancouver composers Mark Armanini, Moshe Denburg, Lan Tung, Jin Zhang and special guest composer Joel Bons (artistic director of Amsterdam’s Atlas Ensemble): music that transcends cultural boundaries, performed on instruments from all over the world. For the first time ever at a VICO concert, the performance will include large-screen video, giving audiences an up-close view of the musicians and their instruments in action.

The VICO is currently the only professional orchestral ensemble in BC (possibly in Canada) devoted to performing inter-cultural music on a grand scale. Planetful of Sound offers VICO musicians and composers an exciting opportunity to connect with Joel Bons, who has been breaking similar ground in Europe with his acclaimed contemporary music group Nieuw Ensemble and the Atlas Ensemble. The latter is described (very similarly to the VICO) as “a unique chamber orchestra uniting brilliant musicians from China, Central Asia, the Near East and Europe, presenting an unheard soundworld of western and non-western instruments.” Like the VICO, the Atlas Ensemble’s repertoire consists almost entirely of specially commissioned works, by such composers as Guo Wenjing, Jia Daqun, Faradj Karajev, Fabio Nieder, Theo Loevendie , Frangiz Ali-Zade, Bun-Ching Lam, Jack Body, Stefano Bellon, Artjom Kim, Javanshir Guliev and Evrim Demirel. (www.atlasensemble.nl)

In the VICO, Western-trained orchestral musicians rub shoulders with performers in musical traditions from all over the world…shedding light on the musical traditions of Canada’s many cultures and the myriad bridges between them. For more information on the ensemble and its upcoming events, please visit www.vi-co.org.

Planetful of Sound was made possible through the generous assistance of the Chan Endowment Fund of the University of British Columbia.