“Ask yourselves, doesn’t everything flow from South to North, from poor to rich, from dark to light, from girls to men? You prefer not to think about it. Fine, that’s where I come in.”

From one of Vancouver’s most innovative theatre companies comes the world premiere of Pink Sugar, a new play by award-winning writer Natalie Meisner. In four interlocking monologues, a charismatic cast brings to life a bitingly funny, desperate world in which everything’s a commodity to be bought, sold or stolen – from guns and drugs to human bodies.

Spencer (David Beazely)’s holiday in Europe goes horribly wrong after he falls in love with the mysterious Elan (Moya O’Connell, making a brief return to Vancouver in between Shaw Festival seasons). Left alone and seriously injured, the young man tries to piece together what happened – but is it too late? Meanwhile, Sylvie (Laara Sadiq), a trafficker in weapons and other merchandise, strikes a deal with Max (Scott Bellis), a lawyer on dialysis, which draws everyone into a very questionable transaction. The line between innocence and culpability is blurred, then redrawn, in this dark tale of love, betrayal, and missing body parts. 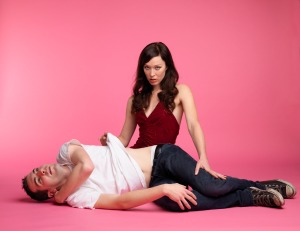